Tell us about yourself?

I am Mike “Wid” Middleton. My nickname “Wid” came from a band mate who noticed it was my conjunction for ‘we would’ (we’d), as in “Wid go downtown”. I was the drummer for a band from DC called The Neptunes. As a punk tie in, I graduated Wilson high school in DC in 1985 (where Ian Mckaye /Fugazi  went), and was a contemporary of the guys in Soulside/Girls against Boys , Citizen Cope, and a bunch of other punk/go-go/rockabilly musicians. We were primarily a roots rock band along the lines of NRBQ.

In 1987, we decided to move to Austin, TX to immerse ourselves in the growing scene down in Central Texas. We were fans of the Fabulous Thunderbirds, and Joe Ely, as well as knowing other DC rockers who had moved down there, most notably Evan Johns from the H-Bombs.
The theory behind the move was that it was easier to tour both coasts, and our first house we rented was a 3/2 for $450.

What was your van situation?

I bought a 1985 B-350 15 passenger Dodge van from a church in Montgomery County, Md. I think it was $7500 with 50k miles on it. It had the Prospector package, and while I don’t know what that is, we always said we were digging for gold.

We drove down in the fall of 1987, and immediately started touring. None of us wanted jobs, so a $200 gig was enough to keep us fed, with a roof over our heads, and enough to fill the thirsty Ram 360 cu. in. V8. The Neptunes toured constantly year round, logging 75k miles a year. We laughed at the time, that we would drive anywhere for $250, even if it was Austin-New Orleans- Houston- New Jersey- back to DC, etc. I think our booking agent (Davis McLarty, Joe Ely’s drummer) threw darts over his shoulder backwards, and blindfolded, at a US map.

“We were 20 years old. It was the time of Arena Rock. It made sense to us at the time.”

The combination of the van being “mine”, and me not drinking much (at the time), meant that I drove 98% of the time. We had installed plywood over the windows in back, and taken all the seats out, except for the first row, leaving us enough room to carry all the gear, including a Yamaha CP-70, in ATA flight cases. Come to think of it, all of our gear was in flight cases. The San Diego rockabilly legends The Paladins once said they remembered us because of our “heavy blue cases”. We were 20 years old. It was the time of Arena Rock. It made sense to us at the time.

With all of the touring we did, we met musicians all over the country. Played bills with Guadalcanal Diary, Scruffy the Cat, Stevie Ray Vaughn, Dash Rip Rock, and hundreds of other gigs. Our original Texas bass player was Sean Mencher, who went on to start High Noon. Second bass player was Miles Zuniga, who later formed Fastball. Our final bass player was Steve Watson, who was still in high school in Virginia when we moved to Austin. Fun side note: Steve’s dad is Bugsy Watson, who at the time was in the Guinness Book for most NHL penalty minutes in a career.

Did you give your van a name?

I don’t recall it having a name. It did have it’s own gang sign. It was a hand gesture that roughly translated into the crossed pick and shovel of the Ram Prospector.

Can you describe any difficulties you had on the road?

We never missed a gig because of mechanical failures, BUT it did overheat in Waco (a hundred miles north of Austin), and we got towed to a gig riding in the van.

I won’t name any names, but on one member’s birthday, I couldn’t find a good place to stop, and that guy shat himself by the side of the road. Another incident was when we were driving across a bridge in Philadelphia. Steve started throwing gum balls, or jellybeans, or something in the back of my head. For some reason I got mad, and kicked the rear view mirror off, before pulling over and fighting by the side of I-95.

The pic below is of us after spending the night in Gunnison, Colorado, where it got down to something like negative 40. Some hillbilly lit a fire under the van to get the oil moving. The pic is actually of us chiseling the snow and ice out of the wheel wells that would build up, and every time we would hit a bump, it would physically hit the tire and “brake” for us.

How did you end up playing with Mojo Nixon?

Ok, so The Neptunes traveled all over the US, playing 46 states with tons of different bands. After three years, Steve and our guitarist/singer Jake Flack decide they have had enough, so the band is breaking up (summer 1990).

Since Pete “Wet Dawg” Gordon (future co-owner/manager of the famous Continental Club in Houston) and I wanted nothing to do with real life or real jobs, we started putting gig feelers out. Coincidentally, at the same time Mojo Nixon was breaking up with Skid Roper and wanted a band. We had never met each other, but all of our band friends told Mojo that an insane piano player, and hard hitting drummer were available.

…We met in Austin on a Thursday, ran through a set of Mojo tunes, and played at the University of Arizona baseball stadium for 10,000 people on that Saturday…

In the Fall of 1990, Pete and I officially became the Toadliquors. The first tour we played was a triple bill of Enigma Records bands: Mojo, the Dead Milkmen, and the Cavedogs (Boston, Ma). In a very non-punk way, the tour was sponsored by Fuji Film. They were already famous for cassette tapes, but I guess they were expanding. Here’s the kicker. Fuji paid for two buses.

It started out as the “Smoking Bus” and the “Non-smoking Bus”. By the middle of the tour, the smoking bus turned into the nobody sleeps bus, and it turned into just the Mojo and the Toadliquors bus. Remember when I said I didn’t drink earlier? Well, with a bus driver I didn’t have to drive anymore, and I only had to be cognizant enough to beat the shit out of the drums for an hour a night.

With Mojo, we did similar long touring schedules, usually 6 weeks on, maybe a month off. We continued using the old Neptune van for merch during the Fuji tour, and local Texas shows. By this time, the van was at around 225k miles.

I sold it to Wet Dawg, who kept it for maybe a year, and then sold it to a local tile guy. Last I saw it, it was headed south on IH 35, still with the Redskins bumper sticker on the back.

What is your favorite memory of playing with Mojo?

Playing in the Pleasure Barons. I got to play with Dave Alvin (from the Blasters), Country Dick Montana (Beat Farmers), Mojo, John Doe (X) along with a superstar cast of Americana musicians, playing Tom Jones and other Vegas hits.

On the Pleasure Barons’ bus, the “destination scroll“ on the front of the old tour bus had numerous names. One was “John Denver” and one was “Shousurtitz”. I didn’t know where that city was until the bus driver said to say it out loud.

I don’t have any pics of Jello Biafra, who we did a record with, near a van or bus.

Earl Freedom (Matt Eskey/Freedom Records/Mojo Manifesto) joined the Toadliquors as a bass player in around 1994. He may have stories about van stuff too. The one story about him is that we would stop for gas, and then take off down the road. Once we hit the highway, I would hear a plastic bottle filling with pee. He preferred peeing in water bottles to the Flying J bathrooms.

During “Don Henley must Die” (Mojo Song), Wet Dawg would beer fuck an inflatable “Luv Ewe” sheep. Somebody brought their own one night, and it got popped. I am sure we did it, but I don’t remember how.

The owner of the dead sheep carved “YOU KILLED OUR SHEEP” into the hood of the rental van. That is hard to explain.

We were a party band. We didn’t rehearse. EVER.  The sex, drugs and rock and roll happened in the van. Except we didn’t play rock and roll in the van. We listened to Bill Hicks before anybody had heard of him. We listened to Richard Pryor, Rudy Ray Moore, Robin Harris, Chris Rock on tape and later CD. We had a portable TV/VCR combo between the front two seats. Since I was always driving, I never got to watch the movies, but I can quote line for line all of Trading Places, Animal House, Caddyshack, and the Blues Brothers.

Somewhere along the way, we stopped carrying around the anvil flight cases, but we still hauled around the two piece piano.

What ever happened to the original van?

After I sold the Neptune van, we rented vans from Capps Rentals in Austin. We always got the Ford Chateau factory conversion. Kept the four captain chairs, and pulled the bench so we could put gear back there. They complained about that, but never said anything about how much I smoked in them. Different times.

Listen to Mike’s current band, The Mooks from Austin, TX. 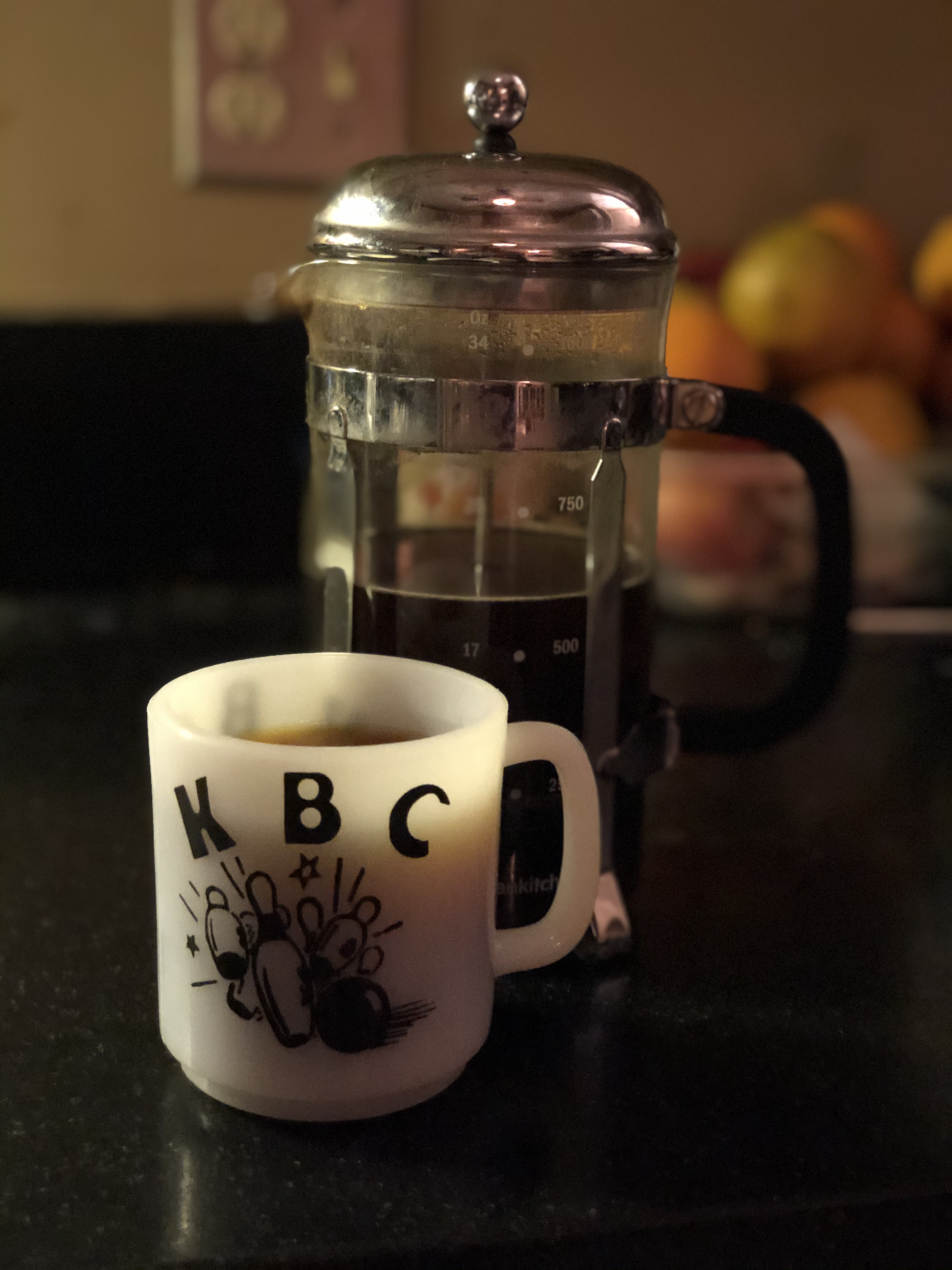 Help me stay fueled up and caffeinated by contributing $5 to the fuel fund so I can keep up with all the band vans that are out there!